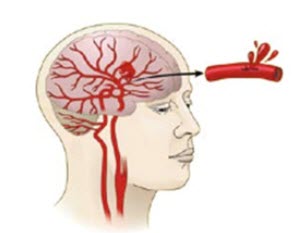 Strokes can be divided into two categories: hemorrhagic strokes and ischemic strokes. Only about 15% of diagnosed strokes fall into the first category. Despite this, they account for approximately 40% of all stroke deaths.

During a hemorrhage stroke, blood will spill into and/or around the brain. This blood will cause swelling and pressure, and both cells and tissue in the brain can be damaged.

Hemorrhagic strokes are either a brain aneurysm that bursts or a weakened blood vessel that starts leaking.

A majority of all hemorrhagic strokes are intracerebral, which means that blood leaks into surrounding brain tissue.

Because of the bleeding, brain cells in the impacted area dies and this prevents that section of the brain from functioning as it should.

In rare cases, the stroke is caused by a genetic condition known as arteriovenous malformation (AVM). In a person with AVM, there is abnormal connection between arteries and veins, typically in the brain and/or the spine. When AVM is present in the brain, it increases the risk of an intracerebral hemorrhaging stroke.

The most common reason behind a subarachnoid hemorrhage stroke is a burst aneurysm.

Less common causes include head injury, bleeding disorders and the use of blood thinning medication. The AVM mentioned above can also increase the risk of this type of stroke.